Back to Profile Gallery > A Look Ahead 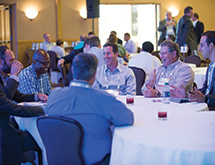 The role of procurement in sourcing IT solutions has been rapidly growing within most businesses.With IT spending having developed into one of, if not the largest areas of indirect spend, procurement practitioners are being called upon to control costs, limit risk, and add value simultaneously. In addition to these internal pressures, conditions surrounding the available technology are also causing businesses to consider the benefits of a more active role for procurement in IT sourcing. Increased complexity around contract negotiations due to saturation of SaaS products, as well as a seller’s market controlled by a core group of major ERP providers sets the scene for an IT landscape well suited to benefit from the skills procurement can bring to bear.

Given the constantly evolving nature of IT, sourcing executives have to stay ahead of developments in the market, as well as quickly and effectively implement best practices. For many leaders in IT sourcing, the venue where they’ve seen it all come together has been the ProcureCon for IT Sourcing conference. Taking place this year in Denver, the gathering brings together procurement executives from a range of industries to benchmark and identify the strongest techniques for managing the IT category. The conference offers a valuable opportunity to meet with procurement leaders who are actively involved in combating similar challenges. It’s an environment where the best and the brightest have come together to identify and overcome common problems, having developed as a specialist event out of the ProcureCon conference series.

For many, last year’s conference came at a time of building bridges between procurement and the IT department. According to data from last year’s ProcureCon IT benchmark report, 43 percent of executives reported that their transitions from a tactical to a strategic focus were behind schedule. In many cases, a lack of adequate resources will be what slows procurement down. Especially around IT, it can be difficult for leaders to keep strategy front of mind when there is a considerable tactical workload needing to be addressed, and perhaps not enough staff. The speed with which a procurement department can transition will also depend on the maturity of the business. Typically, procurement will only be able to evolve to a fully strategic role as key business stakeholders come to a point where they see the need for savings to be built into the strategy of the company at large.

Gaining credibility with the IT organization was another major theme in 2015. Procurement team leaders focused on finding employees with technical backgrounds that could give them credibility with IT. Internal salesmanship bolstered by category knowledge has become part of the package of an ideal hire for IT procurement. This reflects the reality that integrating with IT can still pose challenges for procurement teams.

In most cases, procurement will have a demonstrated track record of creating value for their businesses before they are asked to become involved in IT sourcing. However, as the process of sourcing would have formerly been owned from start to finish by the IT organization, involvement from another department can be viewed as an incursion. Last year’s ProcureCon IT benchmark found that procurement is granted final decision-making power around IT in only 10% of cases. It’s still much more common for IT to retain final say, which will likely remain the case for the majority of businesses even as procurement builds expertise in the technology category. The key to advancing the relationship is to demonstrate a consultative approach, where procurement’s value creating ability merges with the know-how native to the IT organization, creating the strongest possible outcomes. In particular, when managing contracts with major ERP vendors, a team mentality is critical.

Looking forward into 2016, procurement is continuing to solidify its relationship with the IT organization. Department leaders are engaged with advancing KPIs centered around innovation, and keeping pace with the rapid advance of technology. While last year navigating SaaS product contracts and defining service level agreements were a challenge that many teams were looking at, this year startups, disruptive apps, and other cutting edge tech promises to further complicate the landscape around sourcing for technology. ProcureCon IT Sourcing 2016 is set to reinvigorate the strategies of sourcing executives, with many returning to share how they’ve improved their processes over the past year. Managing vendor relationships that range from ERP giants, to medium sized cloud based platform providers, down to startups will be at the forefront of the two-day agenda, taking place this year at the Hyatt Regency Tech Center from June 6-8. An emphasis on internal relationships with IT, key business stakeholders and the C-suite will also feature in official sessions and causal roundtables and networking. To learn more and book a spot at the conference, visit ProcureConIT.wbresearch.com.