Back to Profile Gallery > Air Products 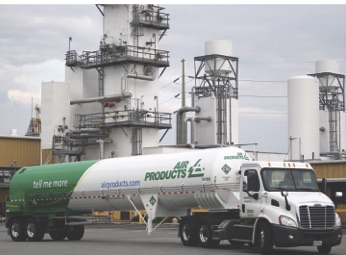 Air Products and Chemicals is on the road to becoming the world’s best-performing industrial gas company. By Alan Dorich

Air Products is flexible when it comes to serving customers’ needs, Strategic Sourcing Manager Timothy Tulio says. “We have different methods of delivering our products,” he says, noting that this can often be through truck, rail or even through pipelines. “The need determines which is the best option for that particular customer.”

The company also will build a facility adjacent to a client’s location if they have a large demand for a particular product, Tulio adds. “We’ll develop a pipeline over into their facility,” he says.

Based in Allentown, Pa., Air Products provides atmospheric and process gases and equipment to multiple markets, including refining and petrochemical, metals, electronics, and food and beverage. The company also is the world’s largest supplier of liquefied natural gas process technology and equipment.

Tulio, who manages the company’s IG Americas Sourcing team, notes that Air Products had recently undergone a restructuring. He says that when its new chairman, president and CEO, Seifi Ghasemi, took his roles in July 2014, he recognized that the firm was underperforming.

“He made an ambitious statement that he wanted us to become the safest and best-performing industrial gas company in the world,” Tulio recalls, noting that Ghasemi saw cost reduction as a strong part of that goal. “He wanted to take out $600 million in cost over a four-year period.”

Ghasemi also identified areas where he wanted the company to improve productivity, including in the area of energy and distribution. “My team specifically focuses on serving our distribution requirements,” Tulio explains. “We’ve been challenged to find more efficient ways to serve our internal and external clients as well as lower our costs.” 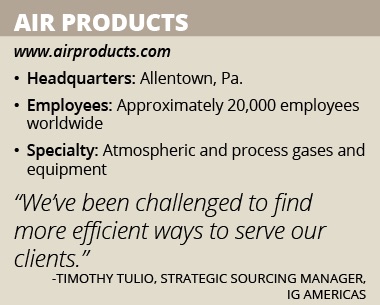 Tulio’s team has changed the paradigm from what the company has historically done and made improvements, he says. Usually, his team takes part in the purchase of equipment, including tractors that haul liquid gases such as nitrogen. “We also buy items such as cryogenic trailers, pick-up trucks and cryogenic tanks,” he adds. “Our trucks are typically delivering to storage tanks that we own on customers’ sites.”

His team also takes part in services including fleet management and third-party transportation. “We do have supplementary requirements where we bring in third parties to help us, of course,” Tulio explains, noting that these services revolve around fuel. “All of us need diesel fuel to keep the trucks on the road and fuel represents a significant component of the entire transportation cost stack.

“If you look back historically nine years, we probably were not as disciplined at managing our fleet,” Tulio admits. “We weren’t as focused on looking at the age of our fleet and what was the optimal replacement cycle.”

Today, Tulio’s team focuses on buying the right equipment at the right price. For example, “We’re going to go out and seek out alternatives to see if we’re getting the best cost for an equipment item or a service,” he says.

His team also uses more data-driven decision-making. “We use data a lot in managing how frequently our fleet should be turned over,” he says, noting that Air Products needs to have newer vehicles. “It’s not advantageous to have trucks that are six to seven years old. When buying a newer truck, you’re going to get improved miles per gallon and lower maintenance cost.”

The company also has looked at leasing equipment instead of owning it. “We’ve been able to create flexible arrangements with our partners like Fleet Advantage where we can get out of these leases earlier,” he says. “That allows us to take advantage of lowering the age of our fleet.”

Air Products also has looked at opportunities for outsourcing. For example, if the company needed to increase its strength in the Midwest, “We would partner with third-party transportation companies and supplement our delivery lanes in some areas,” he says.

The company also has increased the utilization rate of its equipment, which allows “you to reduce the number of units you have,” Tulio says. “We have taken out a fairly large number of tractors that we determined were not necessarily needed.”

Through utilizing its current tractors more often, “that saves a lot of money,” Tulio says, noting that it is now also applying the same concept to trailers. “We look at how many miles a particular asset is running and determine if it’s needed or it’s best served by mothballing it or scrapping it.”

Air Products also has changed the way it sources fuel. “Historically, we used what we would have considered a daily reverse auction for buying tractor fuel,” Senior Sourcing Specialist Geoffrey Abraham says.

“We now have a partner,” he says, noting that its supplier keeps Air Products stocked using telemetry units. “Essentially, [it’s] the same way we manage our customers’ tanks.”

The telemetry units, Tulio explains, inform Air Products and its supplier when they need to restock their clients. “It tells a triggering point when we need to provide a new delivery,” he says.

Tulio, who has been with Air Products for 27 years, is proud of his IG Americas Sourcing team, which includes Abraham. “Each of them have different categories of expertise,“ he says. “We have good communication and are willing to depend on each other, whatever the situation is.”

The future looks good for Air Products, since its initiatives are paying off. “We’ve had really good relationships with a lot of these suppliers,” Abraham says. “[They place a] priority on safety, ensuring that we trust them the same as we trust our own fleet.”

The company also has achieved millions in direct cost benefits, Tulio adds. Although Air Products has not reached its target in cost savings, “We have additional projects we’re pursuing,” he reports.

But Air Products did achieve Ghasemi’s goal of improving its EBITDA, which is now at 35 percent, Tulio says. “It’s exciting to see the changes,” he says.

“Historically, we were there in third or fourth place,” Tulio recalls. “We certainly had a great return. Our stock also is going up on Wall Street, and that’s been exciting to see.”