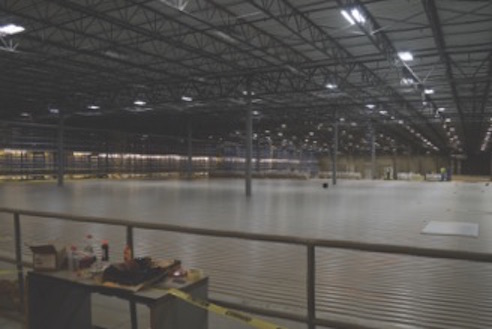 With 600 suppliers, DCD leads the way in distributing English-language comics and merchandise. By Alan Dorich

From its start in a warehouse with only 17 retail customers, Diamond Comic Distributors (DCD) Inc. grew into the world’s largest distributor of English-language comics, graphic novels and related pop-culture merchandise. “Over the years, we have reinvented how we do business to meet the changes and needs of our customers [both vendor and retailer] and the ever-changing challenges in the economy,” Vice President of Operations John Wurzer declares.

President Steve Geppi founded the Hunt Valley, Md.-based company in 1982. A former mailman in Baltimore’s Little Italy neighborhood, Geppi had a passion for comics and realized how profitable they could be when he purchased his first comic book price guide in 1973.
One year later, he opened his first store, Geppi’s Comic World, out of the basement of a TV repair shop. Eight years later, he incorporated DCD and since then, the company has grown to service more than 3,000 comic book specialty market (CBSM) stores, Wurzer says.
“We marry orders for very small quantities of special order items with thousands of retailers’ weekly shipments of comics, games and pop culture items,” he says. “This, combined with our other wide variety of services, afford direct market comic retailers the freight savings and efficiencies that help them run a profitable enterprise.”
DCD has 600 active U.S. suppliers, Wurzer says. “We offer 1,500 to 2,000 new items in our catalog each month,” he adds. “We ship over 2.5 million pieces per week across over 3,000 unique SKUs.” 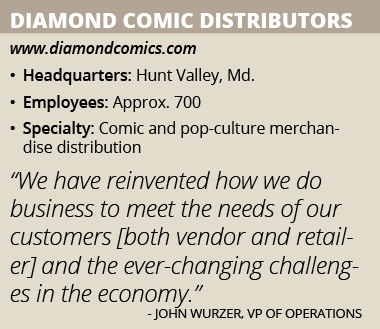 Industry Evolutions
DCD adapts well to change, Wurzer says. “We once had [more than 30] warehouses domestically to service the CBSM market, and now we have four,” he says.
“We have been nimble and flexible as a company,” he continues, noting that this ability helped DCD as it has expanded successfully into the book market and also participate in the growth of the game market at bookstores. The company also has successfully managed its comic and game hobby growth.
The needs of DCD’s customers also are constantly changing, Wurzer says. The company is retooling its main inventory hub warehouse to cope with the evolution of its clients’ product mix, which also includes hardcover books, toys, collectibles and novelties.
The company also has adjusted well to the introduction of digital comics. Although some feared it would erode the sales of physical copies, the success of superhero movies, the comic-based TV show “The Walking Dead,” and the fan-friendly “The Big Bang Theory” has kept them popular, Wurzer says.
Responsible handling of the digital product also has complemented physical book sales by DCD’s vendors. “Digital has worked ‘hand-in-glove’ to create more exposure for the physical product,” Wurzer says. “And you can’t overlook the feel, smell and collectability of comics that digital does not provide.
“It’s helped bring older comic readers back to comic stores, and it’s helped bring them younger readers,” he says. DCD does its part to help people find their local stores with www.comicshoplocator.com, as well as through tradeshows and its salesforce.

Good Investments
DCD regularly invests in its supply chain, Wurzer says. The company recently moved into two new physical locations for weekly shipment processing. It also has a massive retooling and improvement process underway at its inventory hub in Olive Branch, Miss. “[This will] expand accuracy, throughput and storage capacity,” he says.
The company’s implementation of warehouse management systems over the last five years also has increased its efficiency and throughput, Wurzer adds. “[Our] warehouse control system integration system this year will allow for greater accuracy and even more capacity to fill customer orders,” he adds.
DCD has made a habit of looking for niche products and sourcing trends early in their cycles, Wurzer says. One example, he notes, is the Neon Genesis Evangelion figures it carries, based on the Japanese animated series of the same name. Although the figures are popular now, Diamond supplied them to stores in the late 1990s and early 2000s.
“Once the item is mainstream [and] manufactured on a very large scale, our retailers cannot compete with the big box stores,” he says. “So we are always introducing new, cutting-edge products just like comics themselves introduce new characters to our market, well before the mass knows what they are.
“As popular as ‘Walking Dead’ is today, it was a comic book almost 13 years ago,” he says. “[It] is now one of the most recognized pop culture shows on television and the comic book will hit issue No. 160 later this year.”
The company also plans to grow by opening new accounts internationally and domestically. “We are always on the lookout for synergistic acquisition fits,” he adds. “[We’re also] implementing programs for market expansion in partnership with our major publishers.”