Back to Profile Gallery > Shell 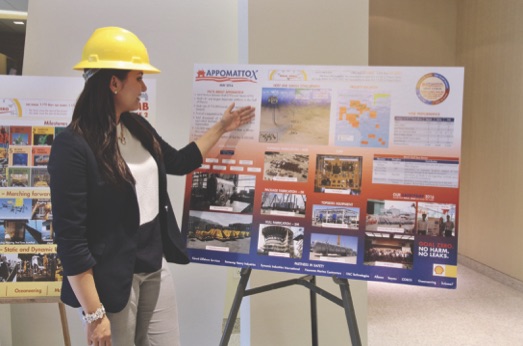 Shell’s Leandra Taylor is helping the company’s engineers understand the impacts their decisions have on the supply chain. By Tim O’Connor

Friends and family members know never to go shopping for a car or piece of furniture without Leandra Taylor. Saving money is an innate part of the 26-year-old’s personality. She spent the first 12 years of her life growing up in Indonesia, watching her mother and other relatives scout out the local market and talk shopkeepers down on price. “Deal-making is kind of engrained in their culture,” she says.
Cost consciousness was a skill that served Taylor well as she began to seek out a career. She was accepted into the Bauer School of Business at the University of Houston in 2009. During her sophomore year she took a mandated course in supply chain, and it instantly spoke to her nature as a deal finder. Within two weeks she decided to make a career of it and joined the college’s supply chain student organization, becoming president the following year. “Something in me lit up and I knew this was something I wanted to do,” she says.

Taylor graduate from the University of Houston in May 2011. The year before, she received a full-time offer from Shell to work once she completed her degree. Taylor’s first three years with the company were spent in a graduate rotation program that acclimates new hires to Shell’s culture and teaches them about different sides of the company.
During that period, Taylor worked on the Mars B deepwater platform in the Gulf of Mexico and the Deer Park refinery in Texas. Taylor, whose father also worked in the oil and gas industry, is now a contract manager for deepwater projects.
In Shell’s deepwater oil drilling projects, the process begins with scans of potential oil sites. Once a reservoir is found, the company develops a plan to extract the oil. That can take several shapes depending on the project and its proximity to other platforms and how much oil Shell expects to find. A tie-back could be use to create a connection to an existing well or an entirely new platform could be constructed.
The procurement department where Taylor works, is responsible for sourcing all the equipment and services that make the drilling project possible. Projects can last three to five years before the first bit of oil is extracted. At that point, Taylor’s team hands the asset off to an operations group that manages the supply needs of the well moving forward.
Projects such as the Appomattox deepwater platform in the Gulf of Mexico can cost as much as $6 billion to construct. Of that, Taylor’s spend is about $250 million. She’s responsible for hiring the vessels that install umbilicals, finding the companies to complete topside packaged equipment fabrication, and sourcing the massive mooring system that anchors the platform in place with a chain tied to the seabed whose individual links are larger than the human body. The process is a total end-to-end procurement.
There are three levels of contracts Shell works with: operational, tactical and strategic. This classification of contracts is associated with varying financial outlays. For large projects like Appomattox, Taylor works with mostly strategic and tactical contracts. 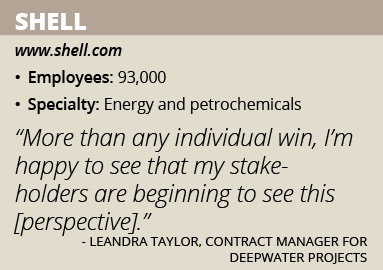 Adding Perspective
In the energy sector, the procurement person is  the one with a commercial mindset in a room dominated by engineers when decisions are made. Taylor sees her role as influencing the business on how their choices impact the overall cost of the project. “Part of my job is not only negotiating externally with my vendors but to negotiate internally with my stakeholders and to get them to understand the commercial impact of their actions,” Taylor says.
There’s a difference between what’s nice to have and what the projects need to have. A small change that seems insignificant can end up costing millions of dollars. Procurement is only about 20 percent of the overall costs, Taylor says; scope and demand make up the other 80 percent. Engineering standards and industry requisites need to be balanced effectively with costs and financial outlay. Taylor’s skills help in achieving this optimal balance and impact the bottom line of a project.
With falling oil prices , many energy companies are tightening capital expenditures. Projects  are under review for viability during these uncertain times. Taking a harder look at expenses and improving the supply chain helps projects that do go forward be more successful.
That impact bore itself out when Taylor got Shell’s engineers to reconsider the paint color on one of the company’s purchased equipment. The project had been painted yellow when it called for white. Some at the company wanted to spend the money to purchase the correct color and reapply the paint, but Taylor helped them reconsider. She engaged with vendors to determine the actual cost and schedule impact the change would cause, ultimately showing that Shell was better off sticking with yellow paint. “More than any individual win, I’m happy to see my stakeholders are beginning to see this [perspective],” she adds.

Finding Affirmation
Taylor is doing her part to encourage the next generation of supply chain professionals. In 2012, Taylor joined Shell’s volunteer recruiting program and three years later became the focal point of all commercial recruiting activities at the University of Houston. A group of 15 people support her in that effort.
Each spring and fall, Taylor visits the University of Houston with the objective of finding talented individuals and selling them on Shell. “Every year, I talk to at least 300 students about what it’s like to work for a company that respects, develops and challenges their incoming talent,” she says.
Taylor wants to match students with internships and jobs when they still have two semesters left, before they have multiple competing offers. “I find we get better results when we get them in early, train them up and expose them to Shell’s culture,” she explains.
The focus of recruiting reflects Shell’s employee needs. In the past, the company had a lot of need for finance and accounting graduates. But in recent years the company has shifted to pursuing more management information systems (MIS) and supply chain majors. Taylor’s recruiting efforts tie into that change in demand. She better manages her recruiting resources and is more selective in deciding which students organizations to work with and sponsor.
Taylor herself was the first supply chain student from the University of Houston to be hired through Shell’s graduate program. Her passion for her alma mater’s supply chain program got others at Shell to buy into the university’s value. What was once a school that was almost entirely off Shell’s radar has now become the No. 1 source of supply chain student talent for the company.
In turn, the University of Houston has responded by using feedback from Shell and competing energy producers to adjust its supply chain program to focus more heavily on purchasing and less on manufacturing and logistics. “There’s a large focus on purchasing specifically, which is good for Shell because that’s what we’re looking for,” Taylor says.
Taylor is already being recognized as one of the up-and-coming talents in supply chain. ThomasNet and the Institute of Supply Management named her to the 30 Under 30 Rising Supply Stars Recognition Program, an honor she says affirmed her career choice and showed there were new opportunities in the field. “Hopefully my story inspires other millennials to pursue this career choice as well,” Taylor says.