Back to Profile Gallery > SAW Engineering 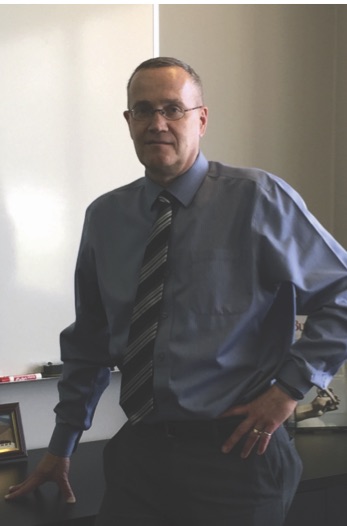 SAW Engineering takes an open attitude to collaboration with customers and partners on its projects. By Alan Dorich

Whether a project is large or small, SAW Engineering Ltd. makes sure to always deliver a high level of performance, owner and President Stephen Weiderick says. “It’s important for me to show value, even if it is the smallest amount of work,” he says.
This approach has paid off for the company, which earns the majority of its work through longtime relationships with customers. “My reputation for me is everything, so I have developed a very loyal client base,” Weiderick says. “I have clients that have been with me for 18 years.”

Based in Calgary, Alberta, SAW offers mechanical, civil, electrical and instrumentation, automation, quality assurance, process engineering and management consulting services to oil and gas clients. Weiderick founded the firm in 1997 after spending 16 years with an operating company.
“I just felt I wanted to go on my own, challenge myself and see what I could build,” he recalls, noting that he initially provided consulting services to a large engineering firm. “I took it on, things just connected and we recently exponentially grew in the worst economy in over 35 years. I never really wanted to get bigger, unless I could offer something distinctly different from everyone else.
“And I believe we have accomplished this with our partnerships and corporate culture to deliver,” he says, noting that he finds more satisfaction in seeing projects to completion as opposed to financial gain. “If the project was successful, I felt the money would look after itself. I was also careful to never borrow any money for operations. To this day, all operating capital is mine.”
Today, SAW employs a staff of 165 and often partners with Propipe Group, a construction fabrication company, on projects. “I like to think of us as one company, even though we’re two,” he says, noting that the firms have worked together for the past few years. “The owner of Propipe, Mike Esfarjani, is a true visionary and exciting to work with.
“We’re in the process of taking the next step to creating a company that should take an integrated approach to projects,” he says, noting that both companies want to bring turnkey services to clients. “That’s what we’re aiming for. “Our focus is construction drives engineering, not the other way around.” 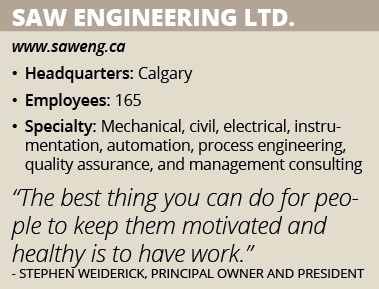 Atypical Approaches
SAW’s success is due to its collaborative approach, Weiderick says. “What we do is we integrate all our vendors with us in the design process so we eliminate duplication,” he says. “So when we generate a set of design drawings, we’ve already met with the vendors.”
This is in contrast to what usually happens in the industry, where an operating company will come to an engineering firm to do the design. “They’ll prepare drawings based on the design basis memorandum [DBM] in isolation from the vendors,” he continues. “When they finish, they’ll then go to vendors and ask for an RFQ [request for quotation] to provide pricing and deliver for those packages.
“The fabricators are then challenged to take process design variables and prepare a suitable design for the application,” he says.  “Typically, these designs rarely match, creating a significant amount of work to analyze, and equalize as part of the award process.
“All this re-work and inefficiencies adds enormous cost and time to resolve, and impacts everyone’s overall performance in delivery of the product for the client,” he says. “We work closely with the vendors as one engineering design team to create one set of drawings up front that are accurate and correct. That collaborative approach allows us to put a much more accurate estimate and time line to execute the project. Our fabrication and construction re-work is less than one percent and no one can execute as quickly as us.
“Advancing a project by six months allows our clients to generate revenue sooner and this is critical when large amounts of capital are at stake,” he adds. “We provide cost and schedule certainly that is demanded and needed in our industry.”
This approach has worked for Weiderick throughout his 36-year engineering career. “It’s the way I like to execute work,” he says, noting that this has allowed SAW to generate hundreds of relationships based on trust.
“Our vendors know we are not out to screw them but help them succeed,” he states. “Their success is our success. I like to say your vendors are your best friends. They are experts at what they do and are critical to a project’s success.”
If Weiderick calls a vendor and orders four 7042 waukesha compressors, they will hold them for him, just based on their previous work together. “They know they’re going to get a purchase order for that equipment,” he asserts. “Trust and reputation is everything.
“It goes along with our whole philosophy,” he says. “We help them and they help us. There are no roadblocks. We [all] want to do a good job.”

Sky’s The Limit
Weiderick is proud of SAW, its culture and the support of its staff. “The best thing you can do for people to keep them motivated and healthy is to have work,” he says. “If you don’t have work, you’re going to have serious problems.”
Although the company had some recent temporary layoffs, “[We] expect to be at full capacity by the end of the third quarter,” he says. “We have a gap with our major projects just wrapping up and the next projects in the queue starting in the next few months.”
Weiderick says he is “a go-forward guy” when it comes to SAW’s future. “I really look forward to getting where we’re going to be,” he says, noting that he will turn 60 soon. “I’ll have to reassess where my place is in the organization.”
This could find Weiderick taking a lesser role in the company. “As for the company, I think the sky’s the limit in what we’ve created and what we’ve delivered on,” he says. “We can only get better at it.”