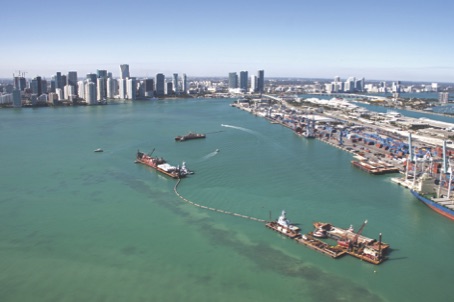 Great Lakes Dredge & Dock leads in maritime dredging without compromising the safety of its people. By Stephanie Crets

Founded in 1890, the company originally focused on the dredging and construction of Chicago’s river lock system and existing shoreline, and on executing work on major city landmarks such as Coney Island, Palm Beach and Atlantic City. Since then, GLDD has grown its service offerings and expanded its global presence well beyond the Chicago area.

Much of its work involves beaches and ports. When a particularly terrible storm ravages a coastline, removing most of the sand, that’s where the dredging comes in. “We want to return a community’s beach to them,” Director of Purchasing Brian Racine says.

Another key aspect of the company is port deepening. GLDD helps ensure entrance channels at various ports throughout the United States are wide and deep enough to handle the new class of larger vessels coming from countries like China.

“Our job is to make sure the ports and entrance channels have safe entry for the new, larger class or Panamax class ships,” Racine says. “We recently deepened the Port of Miami and now we’re in Savannah, Ga., doing the same thing. Those are exciting, multi-year jobs. It’s big work. This kind of work is integral for the big-box retailers, for example, to get their goods. We’re the most important company you’ve probably never heard of.” 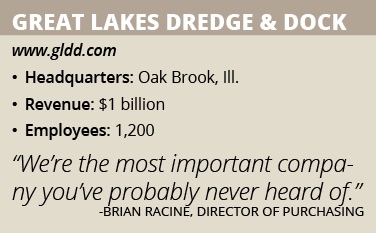 GLDD prides itself on being a low-cost operator for clients, where data is king and business decisions are based on analytics. Racine says it originally operated as a hand-to-mouth buyer, but now it is focused on tactical purchasing and growth through acquisitions. As director of purchasing since 2012, Racine’s focus is the budget and the supply chain at large, both internationally and domestically. His team focuses on everything from indirect/direct purchasing to corporate purchasing.

“We’re trying to put as much as we can on spend under management,” Racine explains. “Because of the tactical purchasing we do, there are many commodities that are under contract and many more to come. That’s been an important step for us to do, to automate our requisition process and to lean it out. Tactically and strategically, we’ve hit the 21st century.”

When it came time to put in a new ERP system for their newly acquired companies, GLDD overcame several challenges to get a better grasp on the data. When Racine first came to GLDD, he says there were two separate systems: one for vessels and one for job sites. He’s been instrumental in getting the new ERP system up and running. The new system for the marine group is set to go live in September.

“I’ve been doing a lot of commodity strategy with multi-year agreements with our vendors, which allows for much better analysis,” Racine continues. “Our systems have been disparate systems with data in many places. Pulling that together requires two IT systems and teams validating the data, testing and trusting it before you can even put it into some modicum of analysis. Then comes vendor selection, crafting an agreement and analyzing what kind of savings can be had by that. It’s been very rewarding.”

With acquisitions, GLDD can have better leverage when seeking out opportunities, which also creates better spend for the company overall. “When you involve yourself in acquisitions, you’re creating better spend, and that speaks volumes,” Racine says. “Plus, vendor rationalization is the order of the day. We’ve seen as many as eight to 10 vendors reduced to one primary vendor and, perhaps, an alternate. That’s key. That’s what supply chain is all about.”

GLDD is the kind of company that invests a lot in its people and the industry, says Racine. Employees want to stick around to learn and grow, some for more than 30 years. “It’s a very interesting industry and great company,” he continues. “They foster creative thinking, new ideas, out of the box, bringing the right people together for projects, making good decision. That’s all you can ask for. Your voice is heard here and that’s key.”

Plus, safety stays at the top of GLDD’s priority. In 2006, the company adopted an “Incident- and Injury-Free” safety management program that has been integrated into all aspects of its culture. Racine is on the safety leadership team that focuses on job site safety and internal corporate safety. That entails making sure everyone has what they need, from hard hats and safety glasses to the appropriate tools.

In addition, GLDD’s leadership looks at the safety of processes and procedures. For example, one of the tools used onsite is a hand-held grinder. The old way to use this tool was to put the trigger lock on and let the tool do its work. But if the worker lost control of it, he or she could seriously injure their leg or hand. Now, it mandates that the grinder does not have a trigger lock and the company has seen a greater reduction in injuries.

“It’s really important that everyone goes home safe every night,” Racine says. “The company prides itself on safety. That’s No. 1. I’m proud to be a part of that culture. We’re making sure the teams out in the world have what they need when they need it and know how to use it.”