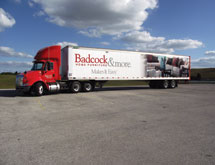 The phrase “out of stock” is one of the last things any retailer or retail customer wants to hear. For retailers, this is especially true in the current soft economic climate, where a sale lost as a result of an out-of-stock carries an even higher cost when it comes to customer retention.

One of the country’s largest privately owned furniture retailers is taking steps to keep its customers satisfied by keeping items on its showroom floors. “After the recession, we beefed up our inventory and went for even higher service levels,” says Greg Brinkman, senior vice president of supply chain for W.S. Badcock Corp. “We know the cost of losing business is greater during a recession than during a boom, so it was essential for us to keep products in stock.”

Since the onset of the recession in 2008, the Mulberry, Fla.-based company has combined this strategy of increasing its service and safety stock with the addition of new product lines to retain customers. “We increased our SKUs and added laptop computers and other items that we never did before to try to keep people coming into our stores,” Brinkman says. These actions helped W.S. Badcock Corp.  remain in the black and have also helped it grow in 2011 at a 7 percent rate over 2010.

Since its first store opened in 1904, W.S. Badcock has stayed true to its founding philosophy of “Badcock will treat you right,” the company says. Treating customers right by keeping products in stock requires a significant investment on the part of W.S. Badcock’s relatively young supply chain operation.

Brinkman, who previously served as director of logistics and international transportation for Eckerd Drug Co. for 20 years, joined W.S. Badcock in 2006 with the goal of establishing formal supply chain practices, he says.

Since arriving at W.S. Badcock, Brinkman and his team have established formal supply chain procedures and strengthened the company’s ties to its factory suppliers. One of Brinkman’s first actions was the building of an effective replenishment team responsible for maintaining inventory in each distribution center. The replenishment team operates within supply chain and separately from the merchandising department, which previously was responsible for maintaining stock.

Badcock’s supply chain team works closely with the merchandising team when it comes to planning special sales and promotions. Promotions are planned four to five months in advance so factory suppliers can prepare stock, Brinkman adds.

The merchandising team also works with replenishment and the supply chain departments to turn over stock, generally on a quarterly basis. “Furniture is fashion – you need to get it to the market fast when it’s new, and get it out fast when it’s old,” he adds.

Brinkman’s other initiatives include the use of metrics throughout their supply chain. These metrics, which are monitored and posted weekly, track in-stock performance, distribution center productivity performance and supplier and factory shipping performance. Within the distribution centers, individual performance is also reported by work area so that each job can be judged based upon its unique requirements. Employees are offered bonuses for exceeding their productivity goals, he adds.

The productivity of W.S. Badcock’s factories in Asia is similarly monitored. “One unique thing about us is the way we work with factories,” Brinkman says. “We believe in sitting down with our suppliers, working hand-in-hand with them and asking how we can make their lives easier. Our ultimate objective when we work with our suppliers is to get product into our customers’ homes in the lowest-cost way possible.”

One recent investment will make it even easier for W.S. Badcock’s supply chain to maintain close connections to stores. The company in 2011 started to implement a new point-of-sale system from Storis that, when fully operational later in 2013, will offer real time connectivity throughout its operations. Retail sales associates will be able to write a sale and the system will automatically place the order with the distribution center. At the same time and in the same system, the sales associate will be able to know when products will arrive in the event an item is out of stock.

W.S. Badcock also recently invested in the efficiency of its fleet operations. The company partnered with Descartes Systems Group on an automated routing and vehicle management system, he adds.

Although technology greatly aids W.S. Badcock’s supply chain operations, Brinkman ultimately credits his department’s effectiveness to its employees and leadership team. “I’m most proud of the teaching and leadership they’ve been able to provide, as well as how much our people have grown to support lower costs and greater sales for Badcock over the last six years,” he says.