Back to Profile Gallery > Talen Energy When people think of a supply chain, they normally get images of the efforts involved to get a part to the right place, on time. But for Talen Energy, the supply chain also involves efforts to drive down demand, Senior Vice President and Chief Administrative Officer Jim Schinski says.

For example, if the energy and power generation company can use its expertise to limit the amount of maintenance performed on machinery, then Talen Energy will gain efficiency. “That means less labor and less goods and services, while maintaining quality and safety,” he asserts.
Allentown, Pa.-based Talen Energy was formerly part of PPL Corp., which was once “a hybrid utility,” Schinski recalls. “We had deregulated assets and regulated assets.”
In 2014, PPL spun off its deregulated assets, resulting in the founding of Talen Energy. “It was intended to make PPL a rate-regulated utility, such as Duke, and allow Talen Energy to compete on its own with other independent power producers,” he explains.
In 2015, Talen Energy merged its assets with Riverstone Holdings LLC, a private investment firm, and became a publicly traded company. Today, it has nuclear, fossil, coal, gas and power plants in Montana, Texas, Pennsylvania, Maryland, New Jersey, New York and Massachusetts.
In addition to selling power wholesale, “We also have a retail company that will sell to commercial users,” he says, adding that it also serves residential clients.

Driving Efficiency
The priorities driving Talen Energy have changed, Senior Director of Supply Chain Steven King says. “Now that we’re a for-profit company, our two main drivers – from a business plan perspective – are EBITDA and cash flow,” he says.
This requires Talen Energy to keep a close eye on its operations and maintenance (O&M) costs, inventory carrying costs and how it spends money on capital projects. “The competitive nature of being an independent power producer requires a focus on cost,” Schinski says.
“The highest thing that we have in our equation in costs is the fuel,” he continues. “But following closely after the fuel are the O&M of the plant. That’s where supply chain can be a differentiator.”
King and his team worked with their generation counterparts to drive efficiencies. They looked at business processes ranging from purchase orders to deliveries, Schinski says.
“We also looked at category management as our fleet got larger to try to take advantage of discounts,” he continues. “That’s where the savings come in. Saving a quarter on a pair of gloves isn’t going to do anything for you, but saving $2 million on a contract becomes meaningful for you.” 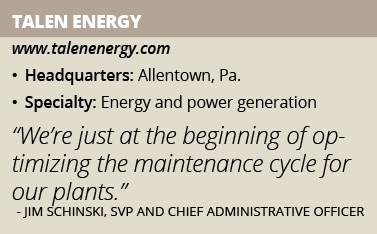 King and his team also looked at Talen Energy’s partnerships for maintaining its plants. Typically, it enters large agreements with national and international companies that have footprints in the regions it serves.
For the past year, the company utilized strategic sourcing when issuing requests for proposals. “We work with the technical team to look at the technical side of it and we look at the financial side of it,” King describes. “We make a joint decision as a business to see if they fit our financial and technical needs.”
Usually, Talen Energy has at least $300 million to spend on maintenance, which can represent 20 new contracts, Schinski says. “Some people do cooling tower maintenance and some others do industrial gas [work] and examinations,” he says.
Although the company looks at capabilities when choosing vendors, it also wants “someone who is willing to partner with us and put skin in the game,” King says. “So if they perform well and we perform well, we game share some of the savings [with them].”
Schinski notes that this is key. “Anyone can claim that they’re going to give you the lowest price, but they have to be providing real good service at an excellent price,” he says, noting that the game share helps ensure that. “They have some added incentive so they’re willing to perform.”
So far, this approach has worked, as Talen Energy enjoyed $50 million in savings last year from a cost avoidance and reduction standpoint, King reports. “On average, we’re finding a 20 to 30 percent savings in all of our bid opportunities,” he says.

Models for Optimization
Talen Energy also is optimizing its predictive maintenance, work planning and inventory, King says. “What’s key about those three things is that they have a direct, bottom-line impact on EBITDA and cash-flow improvement,” he states.
Through this process, the company can lower the amounts of unnecessary maintenance it performs. “Steven’s team has found external organizations that mine data on power plants like ours,” Schinski says. “[They] bring in that expertise and say, ‘We’re not going to do preventative maintenance on this part every two years.’
“We might forgo two rounds of maintenance that might have been $22,000,” Schinski adds. “You’re saving that money and not expending labor to do that, but we’re still operating the plant safely.”
Talen Energy makes these judgments based on statistic-based models from the industry, King says. “Therefore, instead of being time-based, it’s more performance-based,” he says.

A Solid System
Talen Energy also has evolved its IT systems. The company currently operates with four enterprise asset management systems that were gained from PPL and Riverstone.
The systems, King says, give a signal to the supply chain to purchase services. “We wanted a procurement system to interact with all four of those, so we leveraged Ariba,” he recalls, noting that it integrates all of the procurement into one system.
Ariba adds efficiency by lowering the number of times buyers touch purchase orders, King says. “It also reduces the number of times we have to touch on the payment side and it helps with visibility for spend aggregation and category management opportunities,” he says.
The system also allows Talen Energy to funnel requests to the most appropriate vendors and remit payments more easily, Schinski says. “Through the system, we’ve removed personnel administratively that would normally need to cut checks,” he says.
Ariba has improved the efficiency of King’s team. “It allows us to focus on [issues] due to the age of the power plants and the systems,” he says. “We work with the engineering organization to source the right components for modifications and upgrades.”

At the Beginning
Talen Energy will continue to utilize strategic sourcing, Schinski predicts. “We’ll find additional efficiencies in our business practices,” he says. “We’re just at the beginning of optimizing the maintenance cycle for our plants.”
He adds that King’s team has brought on vendors to manage inventory on its sites. “It’s one less thing we’ve got to worry about,” he says. “It’s a beneficial business relationship.”