Back to Profile Gallery > Matthews Automation 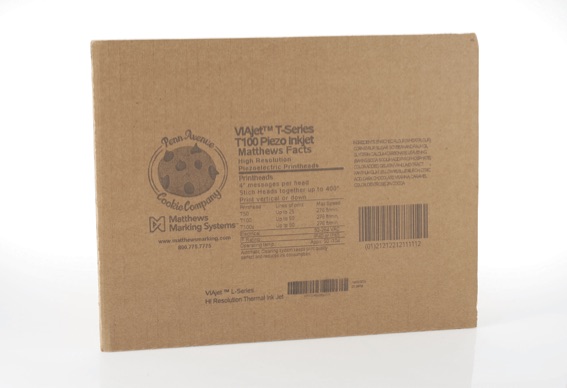 Matthews Automation maintains an edge on its competition in the marketplace and looks for ways to grow. By Alan Dorich

When a company’s clients include e-tailers, it has to ensure it is staying on top of technological advances. Matthews Automation Solutions has been successful in that goal, President Paul Jensen says.
“We continually try to innovate,” he declares. “We try to offer solutions which are a step ahead what others might be offering in the marketplace.”

Based in Pittsburgh, Matthews Automation designs, manufactures and distributes marking, coding and industrial automation technologies and solutions. The company is a division of Matthews International, which has roots going back to 1850, Jensen says.
“Matthews International’s first products were branding irons and hand stamps for marking products,” he says, noting that the firm branched out into other industries, including industrial automation. “It led to a series of acquisitions, which led to the current automation group as it sits as a whole today.”
Matthews Automation’s products can be grouped into two different lines, Jensen says. It supplies warehouse automation and fulfillment systems to “brick-and-mortar retailers or e-commerce retail outlets,” he says.
On the marking systems side, Matthews Automation serves consumer-packaged goods firms. Clients also include “companies that do a lot of marking of industrial products, such as building products,” Jensen says. “A significant percentage of gypsum boards are marked with Matthews printers.”
The company’s latest innovations include MPERIA®, a platform “that allows you to integrate product marking and coding activity with your ERP system,” he says. “We are definitely leading the charge in the area of production line control and integration.”
It is a good time for Matthews Automation to be in business. “The last couple years have been very strong in the industry,” Jensen says. “Fueled by this momentum, we have been investing heavily in new technologies.
“We also continue to look at acquisitions that align with our vision of the future,” he says. “So we continue to look for new opportunities or ways to grow the business.”
Matthews Automation is particularly interested when there is synergy with the automation or marking and coding sides of the business. “We’re looking for acquisitions that complement what we’re already doing,” he says. “We also look for companies that give us global outreach in Europe, Asia, South America or wherever it might be.” 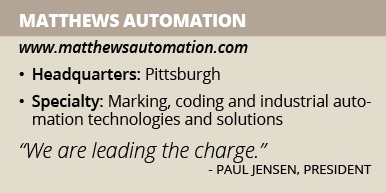 The momentum and pace of change in Matthews Automation’s market continues to increase. “It’s starting to affect many portions of the business,” Jensen says, noting that one segment that is growing strong is e-commerce.
Currently, this sector represents 10 percent of the total market. “Pretty soon, it’ll be 20 percent,” he says, noting that this puts Matthews Automation in a comfortable place. “We’re at the heart of a growing segment.”
The company recently served a large retailer that operates upstream distribution centers (UDCs). “They ship both e-commerce and small quantities that are going out to the retail stores,” Jensen says. “We did all of the order picking systems in [their] three UDCs. It was a very significant change in the business model for this company.”

Important Relationships
The complex nature of automation projects can present certain challenges, Jensen says. “Because of the high level of integration required, we rely heavily on a lot of vendors to be able to deliver against a project timeline,” he says.
This can be complicated with clients that need to fulfill orders for the holiday season. “We are sensitive to how project timelines can be very impactful to a customer. Typically, we need to be out of their facility before October,” he says.
The company’s relationships with suppliers help it cope with these schedules, Jensen says. “[We try to be] important enough to vendors where we have their ears,” he says.
Matthews Automation recently opened a new plant in Costa Rica.
“By doing that, we were able to optimize how everything gets processed,” Jensen says, noting that the plant consolidates more manufacturing steps.
“Instead of manufacturing a specific part in three different places, we’ll do it in one if it makes sense,” he says. “We now have more flexibility in how we manage costs and control the supply chain.”
Jensen, who joined Matthews Automation in 2004, is proud of the company. “We’ve had significant growth since the recession and it’s coming from remaining committed to being best-in-class and finding quality solutions,” he says. “It feels good to look back at where we’ve come over the last eight years.”