Back to Profile Gallery > Hess Corporation 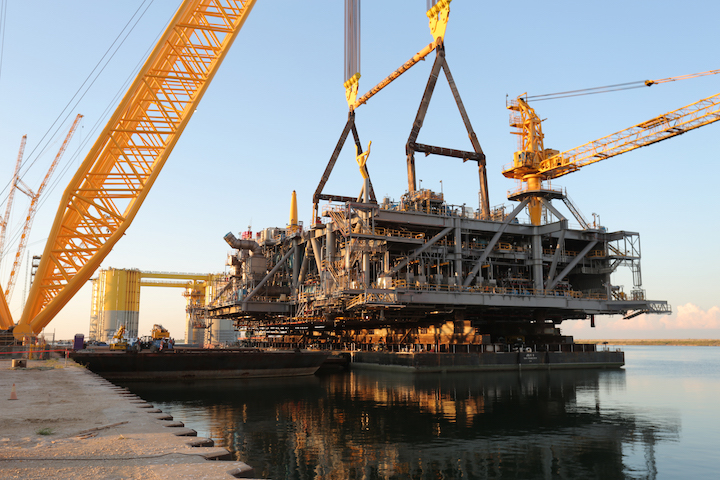 In some industries, supply chain functions are a central part of business planning and transformation within the organization. That has traditionally not been the case in the oil and gas industry, according to Evelyn MacLean, vice president of global supply chain at Hess Corporation. MacLean, working with vice president of lean deployment, Dennis Creech, has sought to change that approach by bringing a new level of cooperation across the supply chain to the company’s latest offshore project.

“Gone are the days where you want procurement professionals just to be commercial experts,” MacLean says. “They have to be change agents. They have to be business transformation leaders. The more they understand human behavior, the more value they can bring to their organization.” Some supply chain personnel struggle to affect change in their organizations. It is critical to involve supply chain leaders in the decision-making structure, she adds. “Some say it’s in the delivery, but sometimes organizations need to take a leap of faith to see the value supply chain can add when they have the opportunity to influence significant business decisions.” 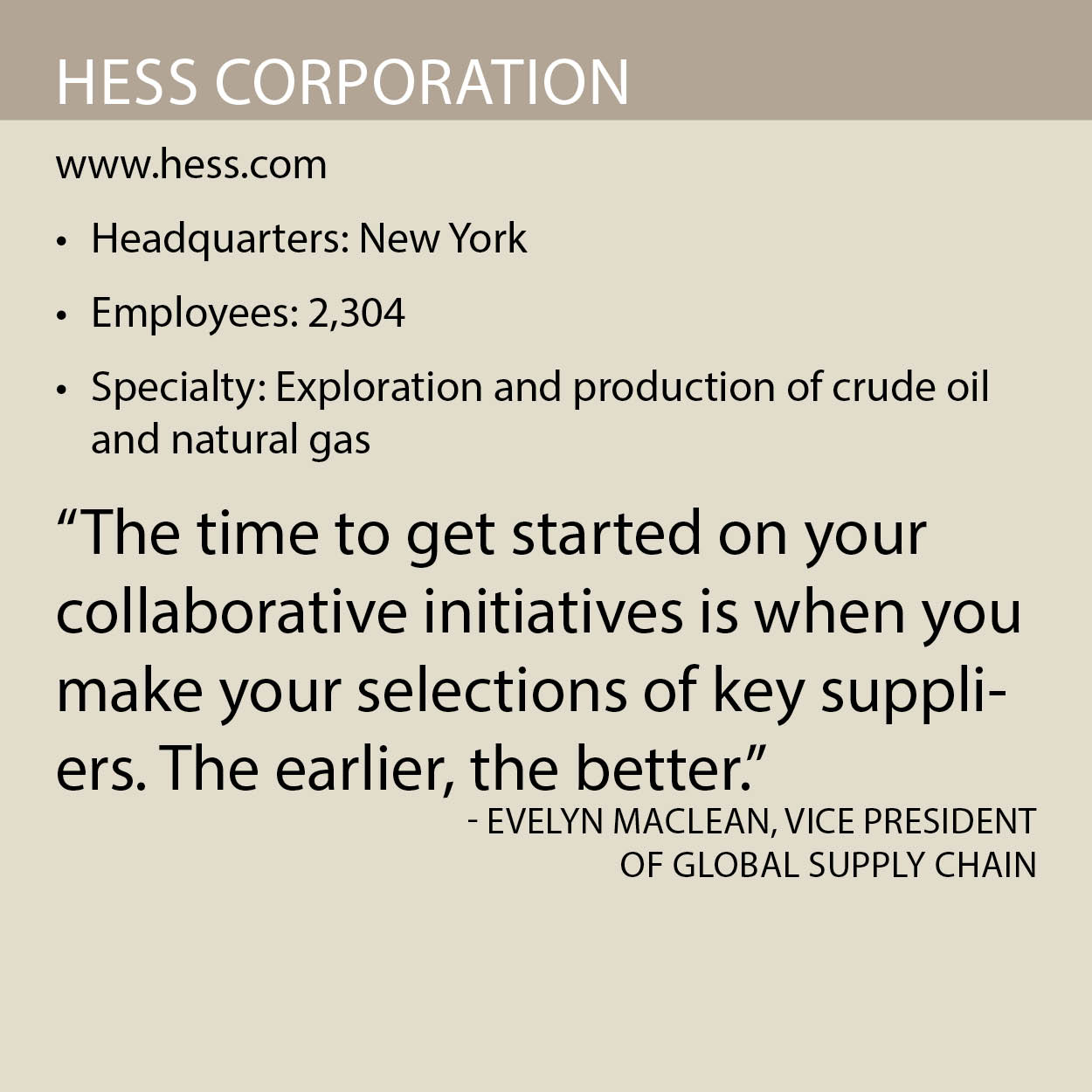 MacLean, a 30-year veteran of the industry, believes that integrating supply chain into the hearts of businesses can help energy companies become leaner and better manage downturns. “The oil and gas industry has always been faced with cycles,” she says, noting that the geopolitical landscape can affect energy prices just as much as supply and demand fundamentals.

The global oil and gas industry has been in a low price period since 2014 due to oversupply. “That cycle essentially calls for operators and suppliers to reimagine their supply chains for a lower for longer oil price outlook,” she adds. “At Hess we are very passionate believers of lean.”

Creating the Environment for Communication

A pioneer of lean in its industry, Hess is extending the practice to its suppliers. MacLean, who joined Hess two years ago, says it prefers vendors that are willing to collaborate on opportunities for improvement and waste reduction. This approach led to the creation of a multi-supplier forum to provide input on Hess’ latest project, the Stampede Deepwater development in the Gulf of Mexico.

The Stampede project was sanctioned in 2014 and production is anticipated to begin in the first half of 2018. Hess estimates that the undeveloped oil and gas reservoir, located 33,000 feet below the water’s surface, holds as much as 350 million gross recoverable barrels of oil, natural gas liquids and natural gas.

“Hess is working with our strategic suppliers to implement lean thinking and tools to identify and remove waste that can deliver 40 percent or more improvements in cycle time and cost while strengthening safety performance,” Creech says.

“Ultimately, we are trying to create a culture where there is more inter-supplier interaction without the oil and gas company having to be central to every interaction,” MacLean explains. 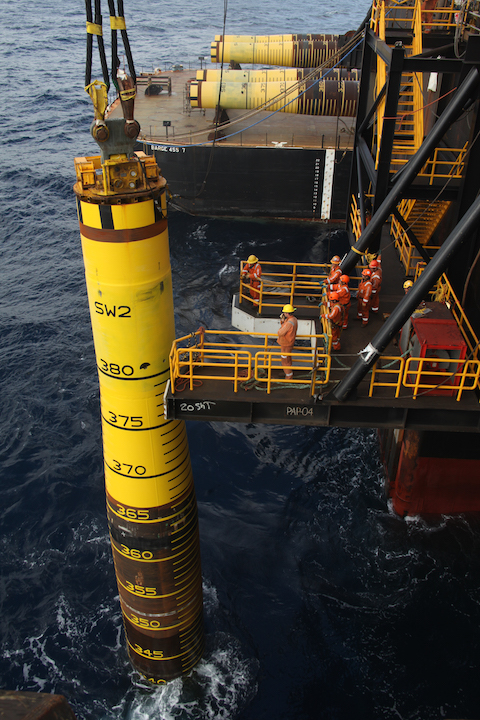 Historically, the project owner, in this case Hess, has directed all of the traffic on a project. Through the multi-supplier forum, Hess stimulated the suppliers to learn from each other and recognize their interdependencies. The suppliers worked together to create “Conditions of Satisfaction”(CoS) where each company specifically defined what they had to deliver in their process step, which could be to their competitor. The idea was to avoid passing along a defect to the next step of the process.

“Both the supplier and the customer of the process step have to sign off that the CoS was met,” Creech says. “This practice created a better understanding of how the quality of their services helps make their supplier partner and the overall project successful.

The approach is a major departure from the past, where suppliers were used to aggressive competition. “The industry has not been known for facilitating multi-party collaboration because every company likes to maintain a lot of control,” MacLean says. “They typically compete with each other, but we all have worked together to successfully break down barriers.”

“The team is dedicated to applying lean and setting a new standard for well delivery in the Gulf of Mexico,” said Creech. ”Each member wants to become renowned as an industry leading team rather than simply a supplier that helped deliver a well.”

The key was engaging suppliers early in the project’s development. “The time to get started on your collaborative initiatives is when you make your selections of key suppliers,” MacLean says. “It’s never too early, but I think sometimes it is too late.”

Hess persuaded the suppliers to cooperate by pitching them on the opportunity to work on a major oil development project, learn about and implement lean in oil and gas, and celebrating their shared success. “There’s something to learn every day, in every conversation if we just open our minds to it,” MacLean says. “If you can get above believing you have all the answers, by being open to the possibility you could learn something from a partner – another party that’s an equal – then everybody wins.”

The approach is something MacLean learned as she earned her executive master’s in consulting and coaching for change from INSEAD, a renowned graduate business school. There she learned to appreciate the psychodynamics and ego that lead individuals to seek power or save face. MacLean says the collaborative strategy Hess is using on the Stampede project helps to navigate around those personality obstacles. “Now all involved are beginning to see the value in applying lean thinking and tools,” MacLean says. “They are beginning to see what’s possible in collaboration.” 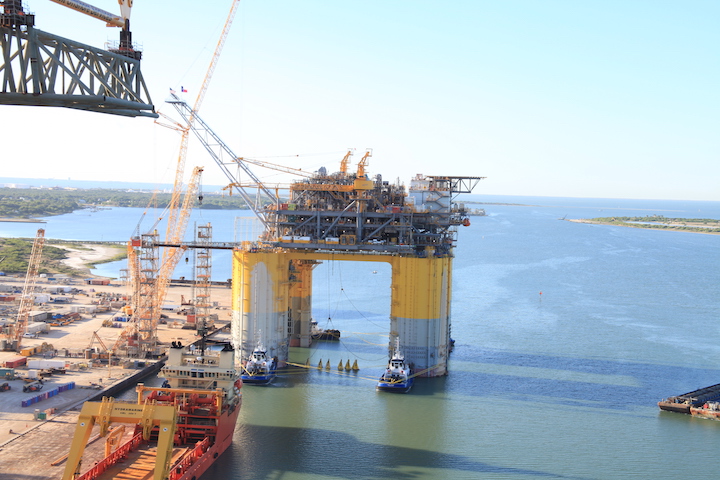 That sense of cooperation did not happen immediately; it took time to build trust among the suppliers. For the first year of the project, the multi-supplier forum met for a full day each month at one of the six members’ facilities. Holding those sessions on location provided the members with an opportunity to tour the host company’s operations and familiarize themselves with members of the extended teams. Further, MacLean says it created a sense among the suppliers that everyone was on equal footing.

The sense that all the major suppliers are “partners” leads to better coordination among all the activities going on around the offshore operation. Several supply chains are in action simultaneously and they must be balanced so as not to interfere with one another.

The equipment for the drilling rig is a supply chain all unto itself, but the platform also has separate delivery operations for maintenance work and the food and recreation needed to support the construction crews. “You’ve got layers of supply chain management in play,” MacLean says.

Hess has an extensive planning process designed to recognize those supply chain risks and mitigate interruptions. Much of that coordination occurs through the company’s project management system, Industry 4.0, which is open to all of the project’s stakeholders. “The industry is ripe with opportunity for enhancing the visibility into each other’s supply chain that would provide further confidence on the status of critical goods and services,” MacLean says.

The technology is bringing Hess ever closer to its goal for complete visibility. “We’re not a fully interconnected supply chain yet, but initiatives like this are a forerunner to that,” MacLean adds.