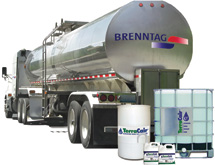 Hard at work before the Jan. 1, 2010, effective date of the Environmental Protection Agency (EPA) 2010 mandate for NOx reduction for diesel-powered engines, Brenntag North America was able to get a leg up on its competition. Although diesel exhaust fluid (DEF) only has been required for use in the United States for a few years, Brenntag is not short on experience. As a part of the world’s leading global chemical distribution company, Brenntag Group, the North American DEF division can apply lessons learned in the European marketplace.

“We’ve distributed DEF in the United States since 2008 but prior to that, our counterpart started distributing it in Europe in 2005,” says Bret Happel, DEF business director for Brenntag North America. “When the EPA mandated near-zero NOx emissions for all diesel engines in the United States, Brenntag was able to learn from their experience in Europe. We knew the market would be almost identical when it came to the U.S. and Canada. What they did three or four years ago is what we’re experiencing now, so it’s beneficial to have their knowledge and expertise about what may lie ahead.”

Information gathered from the company’s colleagues in Europe allowed Brenntag North America to bet on the right product and unparallel distribution methods for this growing market.  The EPA stipulated that all on-road diesel engines manufactured after January 1, 2010 must have emissions controls that greatly reduce NOx levels. The majority of the truck OEMs – including Ford, Daimler, Hino, Volvo and Mack – implemented selective catalytic reduction technology, which treats the NOx in the exhaust with DEF to meet the EPA emissions standards.

“DEF does exactly what it’s designed to do, which is reduce the amount of NOx emissions output by diesel vehicles,” Happel says.  SCR technology has proven to be the winning technology with its ability to reduce NOx to the required levels and improve engine performance which in turn improves fuel economy.

Since the standard was enacted and applied to trucks manufactured in 2010 and on, Happel says only about 25 percent of Class 8 trucks are equipped with an after-treatment process.

The remaining 75 percent were grandfathered in, Happel says, but as companies continue to turnover their fleets, DEF demand will continue to grow. Brenntag expects the DEF market for Class 8 vehicles in North America to increase year after year.

According to Integer research, the market reached more than 130 million gallons in 2012 and is expected to grow to more than 700 million gallons by 2018. These figures don’t include global truck manufacturer Navistar, who will begin manufacturing trucks equipped with SCR systems this year. “Navistar held approximately 20 percent of the Class 8 truck market which will add approximately 20 percent to the aforementioned 2018 gallon prediction,” Happel states.

In 2015, locomotives will be added to the list, followed by marine vessels coming online in 2016.  As SCR becomes the technology of choice, Happel says the industry is considering treating less NOx in the engine and relying more on after-treatment of NOx in the tailpipe, which will ultimately increase dosage rates of DEF.  This shift in emissions strategy could potentially result in a greater fuel economy by reducing NOx treatment in the engine.

Currently DEF doses at approximately 2.5 percent for every gallon of diesel fuel with predictions that the DEF dosage rate may be increased to 3.5 to 4 percent.

With the growth in DEF demand, Brenntag has had to expand its handling and storage capacity.  Happel describes the company as “glocal” – a global presence with local solutions.  Brenntag supplies DEF along with a host of other chemicals all across the world.  The market started out with customers demanding jugs and drums which slowly moved to requests for mini-bulk and bulk, ranging from 1,000 to 5,200 gallon shipments.

“We have installed bulk storage tanks at several facilities already, and will continue to add storage and delivery capabilities where it’s necessary to handle the growth,” Happel states.  As Brenntag prepares itself for this growing market, Happel says their biggest challenge will be the lack of available rail cars.  Rail cars are the most cost effective way to ship large amounts of DEF; unfortunately, the current manufacturing time for a single rail car is an 11- to 13-month endeavor.  However, increasing their storage capacity allows Brenntag to fully unload rail cars and ship them back to their supplier in shorter amounts of time instead of utilizing the rail car as storage.

“We are putting the infrastructure in place to handle this fast-paced market and the ever-increasing needs of our customers,” Happel says.  “We’ve invested for the long haul. Our breadth of experience and capabilities allows us to help our customers make decisions that make managing their supply chain much easier.” ­­­