Back to Profile Gallery > Topicz 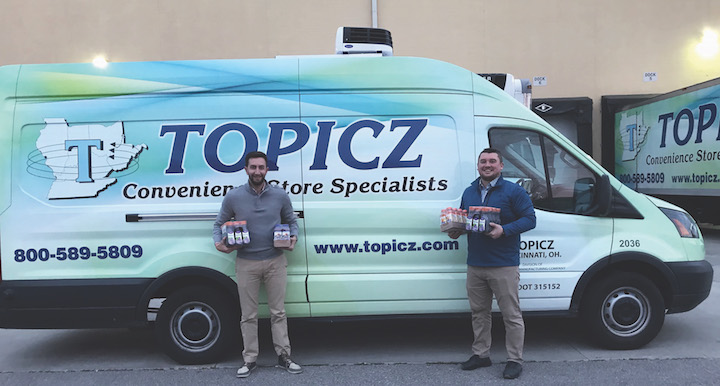 Topicz prides itself on being the go-to wholesale distributor of convenience store goods and in developing partnerships through its success.

As Topicz moves up five spots this year to No. 16 on Convenience Store News magazine’s list of the top 25 largest convenience store distributors in the country, it’s no wonder companies such as PepsiCo are making the switch. “We pride ourselves on service,” Executive Vice President Adam Greenberg says. “Our sales reps and drivers provide service to the highest standards and cater to our customers’ everyday needs.”

The Topicz family founded Cincinnati-based Topicz in 1926 and operated it for the next 50 years until it was sold in 1976. A couple years later, management decided to liquidate its holdings and sold the company to Marvin Schwartz, company president and Greenberg’s grandfather, in 1983. 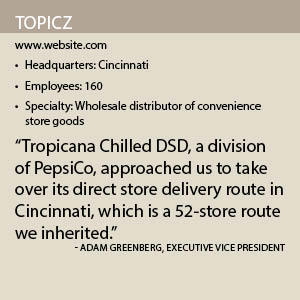 Thirty-four years ago, Topicz was the smallest of six candy companies in its market area and has grown to become a premier distributor of full-line convenience store products. It services 900 customers in Ohio, Kentucky, Indiana, West Virginia, Tennessee and Illinois.

Topicz owns a 120,000-square-foot facility that includes 8,000 square feet of refrigerated and frozen space. “We pride ourselves on excellence through creative service while constantly changing and adapting to our customers’ needs,” Greenberg says.

In December, Topicz will implement handheld scanning devices to improve accuracy and efficiency when scanning product from the loading dock to its trucks and from the truck to the customers’ storefronts. “The system essentially eliminates inaccurately delivered product and limits the paper manifest for the driver and customer,” says Dominic Pellingra, director of operations.

The company will be able to track product from delivery to the warehouse and from the warehouse to the customer. “The system also provides traceability for accuracy and safety. We can see whose hands touched all the product and when it left the building,” Pellingra adds. “When we scan the product it generates a manifest that is emailed to the customer. Ultimately, our goal is to eliminate paper and go to electronic copies only.”

In addition to its warehouse improvements, Topicz has created a new truck design. “We went from white and blue to a brighter, more recognizable turquoise look on the entire trailer,” Pellingra says. “On the inside of the trucks, we moved to a three-temperature ‘T’ design, so we have a freezer, cooler and dry compartments.  The T design is flexible with movable walls allowing us to modify the trucks as business changes and grows without limiting the total space in the truck.”

Topicz updated its truck design because the company wanted its trucks to be seen from a mile away, Greenberg adds. “It took about three years to turn the entire fleet of 27 trucks over to the three-temperature-capable system and now all of our trucks have that capability,” he says. “We also have four new trucks coming in December with backup camera technology and the remaining fleet will be equipped moving forward.”

Topicz has been expanding in the six states it currently operates and has pursued partnerships with schools and universities. It began a partnership with the University of Cincinnati and recently developed a relationship Northern Kentucky University. The company is now a distributor to Mercy hospitals in the greater Cincinnati area.

“Tropicana Chilled DSD, a division of PepsiCo, approached us to take over its direct store delivery route in Cincinnati, which is a 52-store route we inherited,” Greenberg explains. “They had a product distributor in a different state, but they approached us because we are in the market, have a footprint here and are branching into universities and hospitals.”

Topicz’s differentiator was its local warehouse and the ability to have the product ready to deliver daily. “Our value add is the ability to control the inventory. This eliminates issues with incoming deliveries or running out of product mid-week,” Pellingra says. “Everything is done in-house.”

The company added one driver to handle the direct store delivery route and has proved it is able to carry the required SKUs. “We are building and growing our relationship with PepsiCo,” Greenberg says. “We are a leader in the market and have done a great job growing their sales.”

Moving forward, Topicz plans to continue focusing on diversifying its portfolio and adding new partnerships. Greenberg is the fourth generation stepping into leadership and plans to take the company to the next level by expanding its customer base, tapping into new markets and building new relationships with vendors.