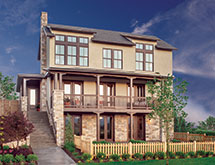 It goes without saying that you wouldn’t invite anyone into your home without trusting them, and David Weekley Homes knows the value of this principle from a supply chain perspective. The Houston-based homebuilder is the largest privately held builder and one of the most successful in the United States. It received the 2013 Builder of the Year Award, and its annual revenues exceed $1 billion. Vice President of Supply Chain Bill Justus says the company places a high value on measuring performance of its national trading partners and challenges everyone, including itself, to world-class levels.

Through a series of evaluations, one-on-one discussions, formalized feedback instruments, coaching sessions and action plans, this unique process allows David Weekley Homes to analyze suppliers across diverse industries, provide feedback, and recognize those truly outstanding achievers through its widely acclaimed “Partners of Choice” Award. All this is in support of a concept that Justus calls “channel alignment,” which he defines as all parties in the channel working together to provide goods and services in a cost effective, timely, consistent manner to the homebuilder.

Justus brought a lot of experience in dealing with complex and extensive supply chains when he joined David Weekley Homes in 2002, having spent many years working in all areas of logistics for companies in the pharmaceutical and defense industries. “Every industry has its unique challenges,” Justus says, adding that pharmaceutical and defense industries are certainly different than homebuilding. Although getting a 2×4 from one point to another doesn’t require the same amount of care as a life-saving drug or a sensitive piece of military hardware, he says, it’s no less important to the success of David Weekley Homes.  The core principles Justus learned in those other sectors have served as a backbone of his philosophy today. By focusing on those principles and doing everything it can to ensure its suppliers live up to their potential, David Weekley Homes  establishes an expectation for performance that makes its supply chain easier to manage, and provides a superior home buying experience for its customers.

David Weekley Homes operates in 19 major markets across the United States, with 15 regional purchasing teams in charge of selecting the vendors from its National Trading Partner relationships who can best suit the company’s needs in those individual markets. Keeping tabs on all of these suppliers and vendors spread across the country can be a monumental task, but Justus says the company has a process in place to help it separate the strongest suppliers in each industry. The company’s supplier feedback platform exists not only to provide David Weekley Homes with information about each supplier’s performance, but also provides the suppliers with information about how they can be more successful in dealing with the company. Justus says that although many make decisions about suppliers primarily based on price, David Weekley Homes knows there’s more to value than a dollar amount. “Quality and service also have to have their place in the value equation,” he says.

But measuring those things can be difficult when considering how vast and varied the supply chain is for a homebuilder like David Weekley Homes. Justus says there are many distribution channels for homebuilders, such as buying direct from vendors or buying through an intermediary. And the parties a homebuilder deals with can be a highly sophisticated national manufacturer or a small, localized operation or any variant in between. No matter who the vendor is, the ultimate customer they all have in common is the homebuilder, and the builder has to be satisfied with the products before they are used in the construction of a new home.

“We wanted to provide a feedback mechanism to our partners throughout the channel to let them know how their customer is viewing them, their customer being us,” Justus says.

The company’s supplier feedback platform was instituted over 10 years ago, and involves a quarterly survey of every team member within David Weekley Homes that may have an informed opinion. Justus says this survey asks employees to rate their interactions with relevant providers in terms of quality and service on a scale of one to 10. The company compiles the results and shares them with each supplier, requiring them to reach out to any employee at David Weekley Homes who rated them below an eight.

After discussing issues with the David Weekley Homes team members that rated them below an eight, the suppliers provide an action plan that details the steps they will take to resolve those issues in the future. Although Justus says the company does not impose a timeline on those suppliers, it will follow up with them after an agreed-upon date to make sure the issues are being resolved. Justus says this not only helps its suppliers better serve David Weekley Homes, but the rest of their customer base, as well.

Justus says this system puts David Weekley Homes in a unique position in the marketplace because it gives success a concrete definition in terms of the company’s supply chain. He says many companies use terms like “excellence” and “world-class” but leave their meanings “soft and gooey” without much in the way of guidance for suppliers hoping to live up to those terms. “Our feedback platform is a practical way to measure world-class excellence,” Justus says, adding that it has strengthened relationships with its National Trading Partners and reduced organizational stress throughout the company.

“Ultimately this allows us to provide a superior experience to our customer, the homebuyer,” Justus says.